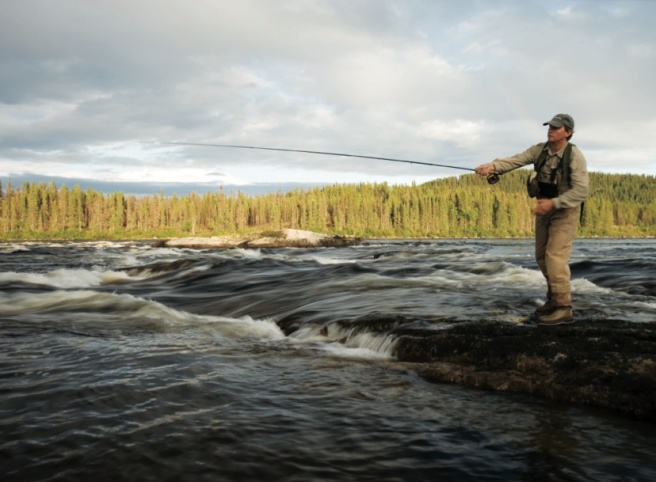 The sad news reached us recently of the passing of Mark Anderson. Mark was an accomplished and enthusiastic magazine journalist who won three National Magazine Awards for his work in Explore and Outdoor Canada.
We read his work in a number of other Canadian magazines, including Financial Post Magazine, Listed, Report on Business, MoneySense, Canadian Geographic, Reader’s Digest, Cottage Life, Ontario Nature and Canadian Business.
His editor at Outdoor Canada, Patrick Walsh, former president of the National Magazine Awards Foundation, talked to us about Mark’s enduring legacy.

For us at Outdoor Canada, Mark was the complete package—an incredibly gifted storyteller with the added bonus of being a highly accomplished angler. Not only did he win major awards for his feature writing, he also earned laurels for his fly-fishing expertise, competing in both national and international competitions. Mark leaves a major vacancy in our stable of writers, and all I can say is we are so thankful we had him on our team when we did.

Mark was indeed one of Canada’s best fly fisherman. The Canadian Fly Fishing Championships awarded him its Lifetime Achievement Award earlier this year.

In one of his best-known stories for Outdoor Canada, “Requiem for a River,” Mark travelled to Quebec’s Rupert River, famous among anglers for its exquisite natural beauty and genetically unique brook trout, the summer before it was dammed as part of a massive hydroelectric project in the province. The story showcased Mark’s rare gifts as an inquisitive and thoughtful writer and conservationist.

I start working my way down the shoreline, all heavy brush and treacherous deadfalls, and when I break out into the open a half-kilometre later, I’m in for a shocking sight: clear-cut as far as the eye can see. It’s the slash Freddy Jolly warned us about, Hydro-Québec’s relentless drive to denude the banks of the Rupert in preparation for the coming flood. After three days surrounded by raw wilderness, it’s a dismal, depressing scene.

The story won a National Magazine Award for Travel writing in 2008 and was also nominated in Sports & Recreation. You can read the entire story here from the National Magazine Awards archive.
A Celebration of Mark’s Life was held at Algonquin College’s Observatory lounge on Sunday, October 26. Donations are being accepted in Mark’s name to Algonquin College Foundation’s Mark Anderson Memorial Bursary, via CanadaHelps.org. Mark’s obituary appeared in the Ottawa Citizen on October 22.
Photographs by Theodore Smith for Outdoor Canada. Special thanks to James Little and Patrick Walsh.