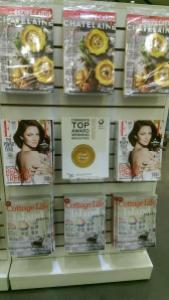 As part of its mandate to promote award-winning Canadian magazines to readers across the country, the NMAF has partnered with Indigo Books & Music Inc to showcase this year’s National Magazine Award winners in special displays at 91 Chapters and Indigo bookstores across the country, and now this special publicity effort has been extended until November 2.
Visit your nearest Chapters or Indigo bookstore and look for the special displays, and pick up a copy of National Magazine Award-winning titles like Chatelaine, Azure, ELLE Canada, Fashion Magazine, The Walrus and Cottage Life, Canada’s Magazine of the Year.
Tweet us a photo of the display @MagAwards.
A look at some of the National Magazine Award winners on display:

ELLE Canada
For this promotional effort the NMAF acknowledges the financial support of the Ontario Media Development Corporation.  An agency of the Government of Ontario, Ontario Media Development Corporation supports the province’s creative economy by providing innovative programs, services and funding for the film and television; book and magazine publishing; interactive digital media and music industries. www.omdc.on.ca