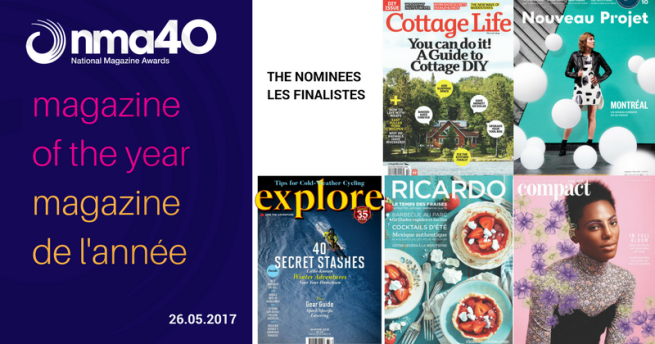 There are more than a thousand magazines in Canada, and each begins with a premise of delighting, surprising, and serving the needs of a community of readers. Whether they cover business or fashion, sports or food, poetry or investigative journalism, city life or international news, Canadian magazines succeed when they pursue top-quality storytelling, compelling design and packaging, innovation, and an awareness of their brand’s relationship to current and future readers.
The NMAF’s judges considered magazines from across the country for our most prestigious award, according to rigorous criteria of quality, impact, innovation, and brand awareness, relative to each magazine’s editorial mandate.
The nominees for the 40th anniversary National Magazine Awards have been announced, and we are excited to welcome Canada’s best writers, artists, editors, art directors, and more to the gala on May 26. [Tickets]
Here are the 5 finalists the National Magazine Award: Magazine of the Year:

Cottage Life is also nominated for a 40th anniversary National Magazine Award in the categories of One of a Kind and Service Journalism. Penny Caldwell, publisher of Cottage Life and former editor-in-chief, has been named this year’s Outstanding Achievement Award winner for her innovative and creative contributions to the Canadian magazine industry.

With a clear and creative editorial strategy that is loyal to their brand, readership, and business, Cottage Life continues to diversify its mandate, grow its audience, and excel at publishing. The magazine’s tone is perfectly playful, the stories educate and delight, and the packaging is alluring and inspires its readers to action.
—National Magazine Awards Jury

Brad Liski, publisher
David Webb, editor
Aaron Yates, art director
Published by: My Passion Media
Explore is dedicated to publishing the best of outdoor adventure, seeking rich stories of outdoor recreation and adventure travel produced by authentic voices. Within their wide range of content, the magazine aims to always include an element of exploration in the outdoors.

With remarkable strength and clarity in packaging travel features, practical how-to guides, gear reviews, and more, Explore is that rare magazine in which every page engages the core audience. Its content is accessible, its writers dig deep into their stories, and its no surprise that the magazine’s readership is growing fast.
—National Magazine Awards Jury

Nicolas Langelier, publisher and editor-in-chief
Jean-François Proulx, art director
Published by: Atelier 10
Nouveau Projet is a culture and society magazine, aiming to stimulate and nurture public debate through curious, sincere, and deep-seated articles. Though the magazine is only five years old, it isn’t new to the Magazine of the Year award. 2017 marks the fourth consecutive year that the Montreal-based publication has been a finalist for Magazine of the Year, winning in 2015 and taking Honourable Mention in 2014 and 2016.

In the quality of its writing, visual content and design, Nouveau Projet is simply mind-blowing. The magazine surprises and delights readers with big ideas, fresh and original journalism, and beautiful illustrations that complete a thoughtful aesthetic. The magazine’s commitment to developing a strong community of readers is laudatory.
—National Magazine Awards Jury

Brigitte Coutu, publisher
Laura Osborne, editor-in-chief
Caroline Blanchette, Lydia Moscato, art directors
Published by: Ricardo Média
Ricardo engages readers as a magazine brimming with delicious, affordable, and simple recipes, aiming to gather friends and family around the table. With their national distribution, they strive to put cooking within reach from coast to coast.

Since 2011 Ricardo has been awarded three Gold Medals and nine Honourable Mentions at the National Magazine Awards. This year – aside from the prestigious Magazine of the Year award–Ricardo has been nominated in five categories. Photos of irresistible chocolate desserts earned photographer David de Stefano a nomination in the category of Lifestyle Photography, while colourful images of strawberry-themed desserts earned the artistic team at Ricardo a nomination for Best Magazine Cover. Other nominations include Best Service Editorial Package and Best Words and Pictures.

Ricardo is an authoritative magazine and media brand that feels alive and energetic with innovation, now reaching beyond Quebec to the rest of Canada. The food photography is top-notch, the branded merchandise is exemplary, and the service it provides to readers sets the standard for lifestyle magazines.
—National Magazine Awards Jury

The Kit Compact is a first-time NMA nominee, and they’re starting off strong with a nomination for the prestigious Magazine of the Year Award. Aside from that, The Kit Compact is also nominated for Portrait Photography, for “Deep Impact” (created collaboratively by photographer Luis Mora, art director Jessica Hotson, and editor Rani Sheen), in which six Toronto women “showcase the boss possibilities of black makeup.”

At the intersection of fashion, feminism, and the millennial generation, the new Kit Compact feels like the perfect breakout magazine for 2017. With a successful distribution strategy, robust digital and social platforms, and a commitment to supporting emerging artists and designers, it’s a magazine of profound energy and creativity.
—National Magazine Awards Jury