Canadian magazine creators and readers are getting excited to see who will win this year’s National Magazine Awards, happening on June 5. The nominees have been announced and this year’s jury has nominated 5 finalists for the award for Spot Illustration. The Gold and Silver winners will be announced at the 38th annual National Magazine Awards gala on June 5 in Toronto.  [Tickets & Gala Info].

Here’s a look at the five nominees for Spot Illustration this year:
Byron Eggenschwiler

Byron Eggenschwiler is a five-time National Award-winning illustrator, with three Golds and two Silvers, along with four Honourable Mentions. His work has appeared in Swerve, Maisonneuve, Cottage Life, Canadian Business, Up Here and other Canadian magazines.
This year his illustration that accompanied the story “Up, Up and Away” in the May 2014 issue of Cottage Life has earned him a nomination. Byron’s illustration supports the story of how highway passages are protecting animals from busy roadways.
And check out our Off the Page interview with Byron in which he chats about the career of a magazine illustrator.
Patrick Doyon
Although this is Patrick’s first time being nominated for a National Magazine Award, his artistic abilities have been internationally recognized, as his animated film, Dimanche, was nominated in 2011 for an Academy Award for animated short film.
This year, his illustration which appeared in the August 2014 edition of Maisonneuve magazine, accompanying the “Letters From Montreal” page, has been nominated. The story told the experience of a woman who had moved to Montreal, the city where Patrick is based. He actively works with both animation and illustration. 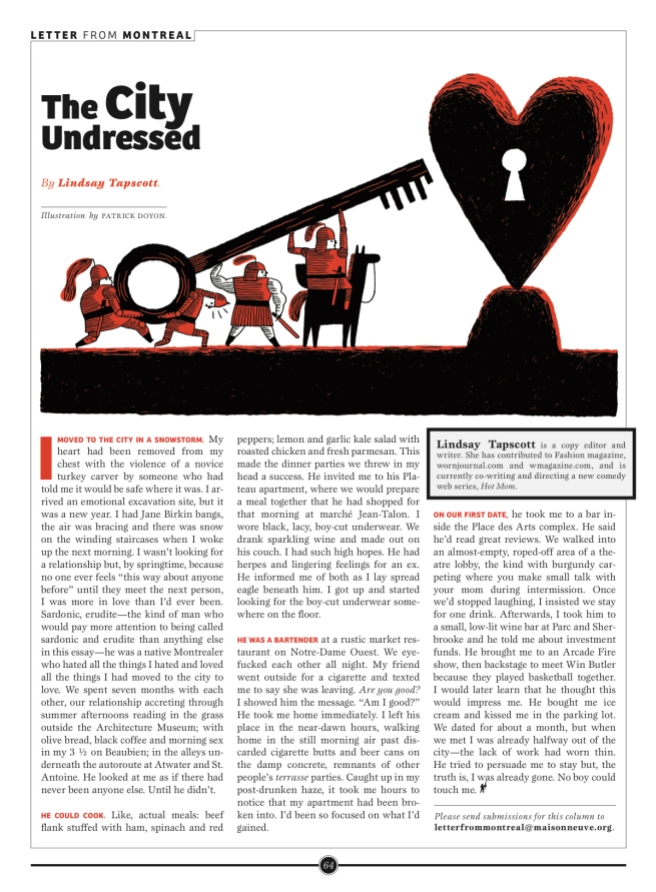 Gerard DuBois
Gerard has received three Honourable Mentions from the National Magazine Awards for his illustrations. His clients include the New York Times, the New Yorker, Globe and Mail, L’Actualité and many more established publications and has won many awards over his career.
This illustration appeared in the July 2014 issue of L’Actualité magazine, accompanying a story that was written in response to a book titled, 1 kilo de la culture générale, which speaks about a shift in cultural norms. His sophisticated spot illustration mimics the tone of the story, as the artwork is reminiscent of a traditional oil painting.

Sébastien Thibault
This is Sebastien’s first nomination for a National Magazine Award, but his work has appeared in many major publications, such as the New York Times, The Guardian, Le Monde and Wired magazine. His work has appeared internationally, in countries like Australia, Italy and Germany.
His spot illustration was featured in the November 2014 issue of The Walrus, accompanying a story about Naomi Klein’s research into climate change. The story brings attention to the link between climate change and capitalism, which Sebastien’s spot illustration clearly exudes. 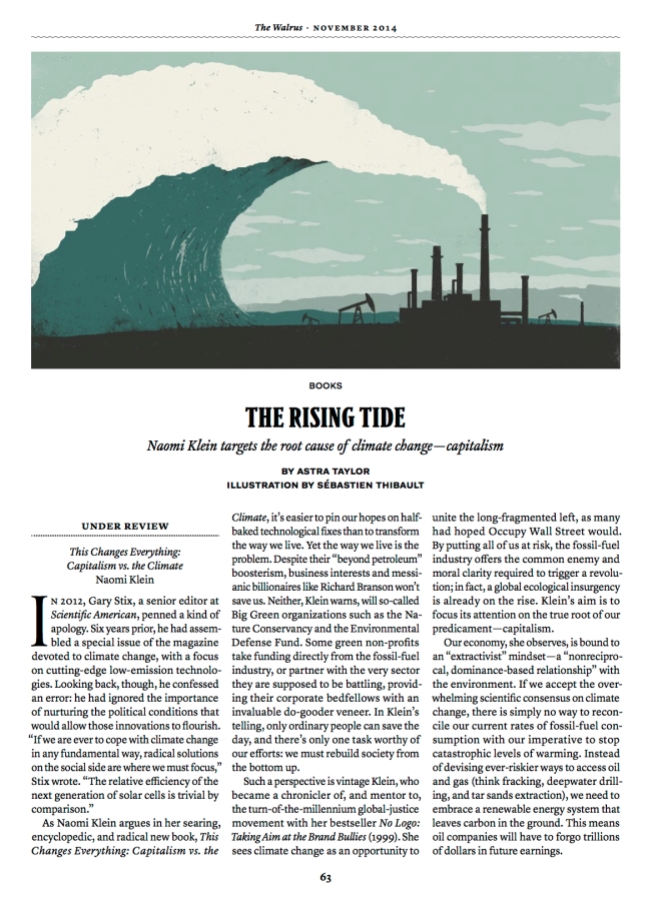 Joren Cull
Joren’s illustrations appear a staggering seven times in the May 2014 issue of The Walrus. Joren has also worked with many other esteemed publications, such as the New York Times, The Guardian, Readers Digest and the Globe and Mail. He has also illustrated the front cover of National Magazine Award-winning magazine, The Feathertale Review.
Accompanying a variety of pages, including the contributors, letters and editor’s note pages, his work is clearly distinct among the glossy pages.

Do you have any predictions on who will win Gold?

Tweet us your favourite #NMA15 nominee for Spot Illustration.