Off the Page is back. In the latest installment of our popular interview series, we chat with National Magazine Award finalist and freelance writer Arno Kopecky, author of The Oilman and the Sea, shortlisted for this year’s Governor General’s Literary Awards.
NMAF: You’re an intrepid magazine journalist. We’ve read your reporting from Iceland and Columbia and others in The Walrus, from Beaver Lake in Alberta Views, and recently from the British Columbia coast in the Reader’s Digest story “The $273 Billion Question,” for which you were a finalist for a National Magazine Award this past spring. How did you get started on this journey to a freelance magazine writing career, and what do you find personally or professionally rewarding about it?
Arno: Intrepid? Thanks, but groping in the dark is usually how it feels. I studied creative writing at the University of Victoria, and when I graduated in 2002 I realized I had no idea how the world worked, let alone how to write about it; so, on Bertrand Russell’s advice, I travelled. Moved to Spain and got a job teaching English, and after two years I’d learned (barely) enough Spanish to land a reporting internship in Oaxaca, Mexico. A string of magazine and newspaper internships followed: New York, Toronto, Nairobi. I was basically a professional intern for a few years. Somewhere along the way I started selling the odd story to various publications, and before long I was too old to be an intern, but the writing and travelling continued.
The thing I love about my “job” is what I think many journalists love, whether they travel or not: Writing gives us an excuse to meet interesting people doing interesting things. We get to join the conversation.

NMAF: The RD feature story appears to have led to an even larger project, your latest book The Oilman and the Sea (Douglas & McIntyre), which won the 2014 Edna Staebler Award for Creative Non-Fiction and is shortlisted for the Governor General’s Award. Was there momentum from your fascinating voyage up the BC coastline to the magazine article to the book, and how did your writing journey proceed?
Arno: Actually it was the other way round: the book contract came first. I pitched the idea to my then-editor at Douglas & McIntyre about two days after my friend Ilja Herb (whose photographs are in the magazine story and book) bought a 41-foot sailboat. We wanted to see the oil tanker routes proposed by Northern Gateway for ourselves, and it was clear from the beginning that the trip would generate tens of thousands of words, if only we could find a home for them. Douglas & McIntyre signed on early and gave us the reason we needed to pursue the expedition.
But Reader’s Digest signed on very quickly as well, and was hugely supportive from the outset. My editor there fought to get me real estate for one of the longest stories that magazine has published in recent history.
Two weeks after I got home from the sailing trip, D&M went bankrupt. Suddenly that Reader’s Digest feature was the only thing I had going for me. Thankfully, Harbour Publishing swept in to the rescue and resuscitated D&M, so that by the time my RD feature was on the stands I had a book contract once again. All I had to do was… write a book.

NMAF: Your approach as a writer to the complex debate about the Northern Gateway pipeline could be characterized by journalistic curiosity, a sense of adventure (to say the least) and perhaps a sense of responsibility, at least with respect to seeking out grassroots perspectives in places such as Bella Bella, Kitimat and others. Was there a particular place or event in the evolving process that made you think, This is the heart of the story, this will grab the reader’s (and editor’s) attention?
Arno: The Great Bear Rainforest–as the north and central coast of British Columbia is known– was itself the thing that captivated me from the outset. In some ways it’s the story’s central character. Here’s this Switzerland-sized labyrinth of whale-jammed fjords and evergreen islands on BC’s north and central coast, the biggest chunk of temperate coastal rainforest left on earth, that also happens to be one of the oldest continually inhabited regions on the planet–Heiltsuk, Haisla, Haida, Gitga’at and many other coastal First Nations have called this place home since the last ice age. I’m not sure how many Canadians are aware of its existence. The fact that oil tankers are now poised to navigate through those waters for the first time was, in some ways, just an excuse to talk about this teeming, volatile, amphibious zone, the likes of which happen not to exist anywhere else on the planet.
NMAF: What is the significance to you of being nominated for or winning awards for your work, whether National Magazine Awards or others? Is there (or do you foresee) a measurable impact on your career?
Arno: I heard a debate on CBC a while back as to whether there weren’t too many awards in Canada’s literary scene these days; that may well be true, but it doesn’t feel so when you get a nomination yourself. It’s become a cliché, how hard it is to make a living at writing, and anyone who wants to give writers a few bucks and some attention-grabbing praise has my everlasting gratitude.
That said, it’s hard to measure what the impact is on your career. Doors crack open, but you still have to push through; money comes, and then it goes. I guess for me personally, insecure hack that I am, the psychological boost that comes with an award is its most lasting aspect. Recognition helps put the self-doubting demons to rest, and it can be called on to subdue them when they inevitably reappear. 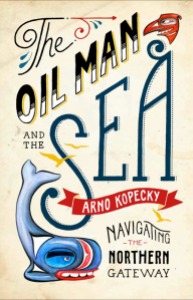 Arno Kopecky is the author of The Oilman and the Sea, which is nominated for a Governor General’s Literary Award (to be announced next Tuesday, November 18) and won the 2014 Edna Staebler Award for Creative Non-Fiction. He is also the author of The Devil’s Curve: A Journey into Power and Profit at the Amazon’s Edge. Follow him on Twitter @arno_kopecky.
See also:
NMA winners headline shortlists for GGs, Writer’s Trust, Giller Prize
New book by Arno Kopecky investigates anti-mining activism
More Off the Page interviews with NMA winners
From the National Magazine Awards archive:
The $273 Billion Question, by Arno Kopecky
Reader’s Digest, Honourable Mention, Science, Technology & Environment, 2013
The Only Risk is Wanting to Stay, by Arno Kopecky
The Walrus, Honourable Mention, Investigative Reporting, 2011